October is more than just another month here at Wilhelm Screeners, it’s a season. Whether it’s masked killers who stalk their victims, supernatural beings or monstrous creatures; all are welcome to the festive celebration of what goes bump in the night- better known as Wilhelm Screamfest. Throughout October there will be 31 horror film reviews, each weekday dedicated to a specific genre: Dead Sunday, Massacre Monday, Childhood Tuesday, Wolfenstein Wednesday, Thirsty Thursday, Modern Hits Friday and Psychopath Saturdays.

The Horror genre has gone through many changes over the last 100 years, and 1968’s “Night of the Living Dead” is a perfect example. Zombies were most famously known through Haitian folklore as slave-like beings, but the late George A. Romero reinvented these creatures to what can be considered the first modern day zombies. Released prior to the establishment of the MPAA, the film was one of the last mature films that accepted audiences of all ages. With a combination of graphic violence, nudity and language, “Night of the Living Dead” quickly became a controversial film within both critics and audiences. Since then, a better understanding of Romero’s work has transformed the film into a cult classic, and later received critically acclaimed recognition.

The film’s premise is as simple as it gets; a group of survivors are forced to seek shelter in a farmhouse as zombies, also known as ghouls, attempt to barge in to satisfy their hunger for flesh. What makes “Night of the Living Dead” so loved is its character work. Each survivor has a unique personality that resonates with the viewer. Much of the film’s rhetoric revolves around contrasting ideologies and the ethos, pathos and logos that come into play regarding survival within a small community. Facing death at their door, the group teeters between working together and clashing quarrels in what becomes a think piece for film scholars. How would oneself react to such a dire situation? Would an individual’s survival overtake the group’s best interest? Social interactions such as these create a stir within the house, adding more depth to the film.

The brilliant screenplay gives several characters their own voice, making it clear what their motives are. Characters like Ben (Duane Jones) offers the moral backbone of the story, as he attempts to not only keep himself alive, but those around him. As an African American, it was quite a groundbreaking choice to have Jones as the lead for the late 60’s, but it helps convey the fact that everyone on the living side must put away their differences in order to survive.

So how are the zombies? To compare it to standards of today would be unfair as it was one of the first films to incorporate a zombie on screen. Indeed these ghouls are quite tame, as they don’t sprint or climbs buildings, but they do offer their own specific terror. It is only at close quarters when they decide to kick into high gear in an almost jogging manner. Adding to this, the ghouls utilize objects as tools to destroy barriers- an aspect rarely used in Hollywood today. This slight intelligence thus shortens the space between deceased and it’s prior living self, making it all the more frightening for the living characters. The usage of television news stations cements realism by giving various perspectives of the event.

“Night of the Living Dead” isn’t just an early rendition of the zombie genre, but a stepping stone for horror as a whole- inspiring many individuals in the movie making business. Through what was perceived as gruesome imagery and well written characters, the film acts as a transition between the thrillers of Hitchcock and slashers of the 1970s’. Watching “Night of the Living Dead” is not just an act of honoring film icon George A. Romero, but celebrating the film that started the zombie craze. 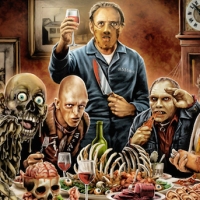