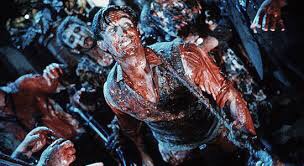 It’s very common in Hollywood for a director’s earlier films to be overshadowed by newer projects. Peter Jackson, known for “The Lord of the Rings” franchise, falls under this category as his long stay in Middleearth made audiences forget one of his earliest films “Dead Alive” also known as “Braindead”. The film is vastly different than his others for it contains some of the goriest scenes ever put on film, making it a must for Massacre Monday’s.
The film follows Lionel, a loner who abides by his overpowering mother’s wishes. Through various events, Lionel comes across a love interest, Paquita. As the top fall for each other, a zombie-like virus takes a hold of his mother, leading to mayhem to the small New Zealand town.
Lionel is a clumsy fool who pretty much is under control of his demanding mother, one who uses her son’s love as a tool of tyranny. He does chores and errands to please the psychotic mother, making her get in the way of his personal life. This relationship becomes hysterical as he tries to take control of the situation once his mother becomes infected. Rather than reporting it to the authorities, Lionel’s caring attitude has him still waiting on his mother like a servant.
Overall the plot is as maniacal and ridiculous as the acting. It’s very reminiscent to say a mature version of low budget shows like “Are you Afraid of the Dark”, in a cheesy overload sense. Things become so insane that the romance almost becomes a spoof of itself, making it all the more entertaining. Eccentric characters like a kung fu priest, Nazi Doctor, and a deranged zombie infant showcase how batshit “Dead Alive” is.
To say that “Dead Alive” is a bloody film is an understatement. Without a doubt it is the goriest movie in the history of film, no question about it. Once the gore begins, the violence gradually ensues into chaos. Certain aspects of the film are so grotesque, it’s recommended to not watch while eating. Anyone faint hearted should avoid the film as the putrid events that unfold will churn just about the more strong stomachs.

There are almost no usage of CGI, as practical effects take front stage; excluding the outdated yet charming usage of stop motion for a rat monkey. If you can get past the pure disgusting nature, these practical effects are a sight to behold. Through clever editing, transitions from actor to prosthetic dummy are seamlessly masked; leaving you scratching your head on how it was accomplished.

Getting past the vile displays of gore, one could really appreciate the time and skill put into the art. The film goes so over the top that it transforms into a dark comedy rather than a horror film, as the film enters a surreal state.

The zombies are very much different than most film representations, as destroying the head isn’t enough to stop them. Even separated organs continue to stalk their prey, which is pretty much unheard of in a horror film. The dead themselves are more like cartoon characters for the lone fact that their actions are the least bit realistic. That being said, it’s quite enjoyable to see the ridiculousness playout.

“Dead Alive” definitely isn’t a film for most, as only a sliver of moviegoers will enjoy it. As a spiritual cousin to the evil dead franchise, the film manages to have charm, humor and great effects for a low budget movie. If you are looking for a good time, and don’t mind turning off your brain to enjoy pure gore, this is the film for you.